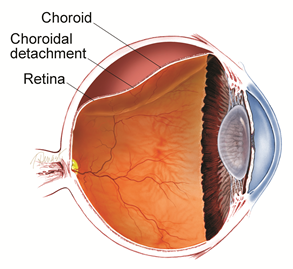 The choroid (pronounced “CORE-oyd”) is a spongy layer of blood vessels that lines the back wall of the eye between the retina and the sclera (or the white part of the eye). It plays an important role in delivering oxygen and nutrients to the outer half of the retina. The choroid is normally directly next to the sclera, but can be displaced by fluid or blood, leading to a choroidal detachment (separation).

When the choroid is detached from the back wall of the eye, patients may not feel anything at all, or may feel that the eye is achy and sore. In some cases, a choroidal detachment can cause more severe pain. Often, the vision is blurred as well, though the degree of blurring varies and often relates to other eye issues that can accompany a choroidal detachment, such as recent surgery, or high or low pressure in the eye (intraocular pressure).

In contrast, hemorrhagic choroidal detachments occur when a choroidal blood vessel bursts and suddenly fills the space between the choroid and the sclera with blood. This most often occurs during surgery but can occur following surgery, and is more frequent in older patients with a history of hardening of the arteries, or who use medications to thin their blood.

Risk factors for developing a choroidal detachment include:

Your retina specialist will perform a detailed eye exam. Often, an ultrasound is helpful to document the size and composition of the choroidal detachment (serous, hemorrhagic, or mixed), and to follow the change in size over time (Figure 1).

In cases where the intraocular pressure is elevated, medications to lower the eye pressure are sometimes prescribed as well. In cases of serous choroidal detachments caused by persistently low pressure after surgery due to a leaking surgical incision, measures may be required to close the leak.

Thank You To The Retina Health Series Authors

Copyright 2016 The Foundation of the American Society of Retina Specialists. All rights reserved.

The Ophthalmologists at Retina Specialists of North Alabama are dedicated to providing state of the art medical and surgical treatment of your retinal problems. We are available 24/7 to help you and your loved ones minimize the effects of serious vision problems as quickly and effectively as possible.